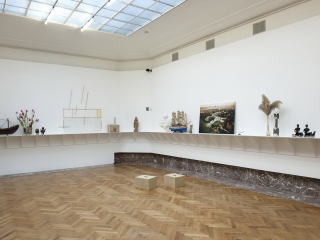 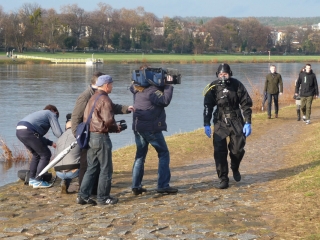 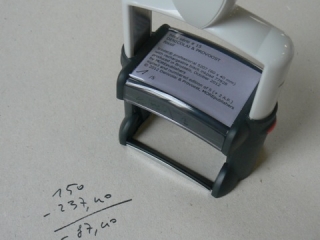 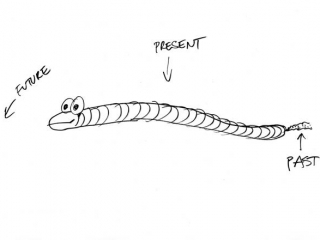 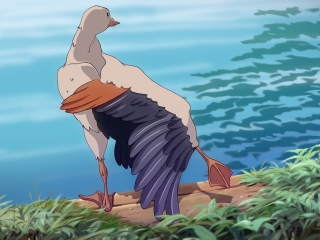 The Italian-Belgian duo, formed by Simona Denicolai & Ivo Provoost, are multidisciplinary artists who work with – but not exclusively – animation, objects, installations, performance, video, and publishing. They seek to offer collaborative and procedural approaches, sometimes over the long term, sometimes as a one-off performance, that involve complicity and collaboration with people who are not from the world of art but who are an integral part of the worlds that surround us. They often borrow the elements that are present in a context to combine them, separate them or assemble them together, and to create a language. They work more like intermediaries between the various components of a context to make them interact with each other through their own forms. It is this role of intermediary (or ‘director of the real’) that interests them the most: What is the artist’s role in the city?

The project EYELINER that Denicolai & Provoost have conceived for the BelgianArtPrize, focuses on objects that are displayed in the windows of small merchants and on window ledges, and thus also focuses on the people that put them there. These objects offer a more profound glimpse behind the scenes of the city. They are taking up the role of a director who creates scenarios with the available material. The artists exhibit objects that they have found lying around in the public space and through them expose the nervous system of an urban environment, for these things also lie around in the collective consciousness. Every individual object therefore fits into a wider discourse that is intertwined with the history and individuality of a place. The exhibition, that was already there in the city, can be visited after May 28, 2017 using a guidebook presenting the objects and their owners, complete with their addresses and biographies.

For their installation in the BelgianArtPrize 2017, the artists received the generous support of  : 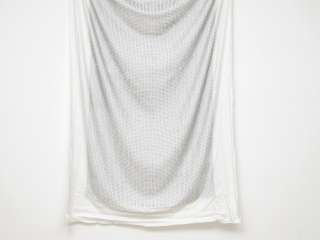 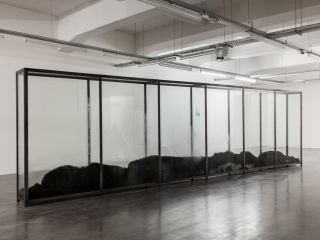 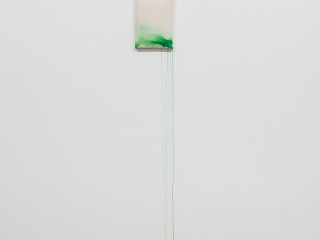 Edith Dekyndt experiments with the possibilities of the most ordinary materials, which she brings into the artistic domain. Traditional considerations of Fine Arts have no place in her approach, which breaks with the secrecy of the artist’s studio to operate in the open, in complete immersion in the world. Her work invites us to change not only our perspective, but also our way of being and of influencing the world.

The new work They Shoot Horses that Edith Dekyndt has created for the BelgianArtPrize clamps the viewer between a velvet curtain perforated with steel nails and a screen showing short archive films of the Marathon Dances from the 1930s. The is reminiscent of the kind of curtain that falls after a stage performance in a concert hall. This luxurious and comfortable velvet fabric that reminds of a curtain that falls after a stage performance, stands in sharp contrast to the cool hardness of the nails that pierce the fabric. The installation references the iron curtain that blocks the Centre for Fine Arts’ Southern entrance, and by extension, the way that fences raise everywhere in the world. The work links also the history of reality shows to the society of today. In the archive fragments that show couples dancing days and days until they collapse from exhaustion for the free food and the chance to win a cash prize, the artist sees a resonance with the situation in which many deprived people find themselves today.

Edith Dekyndt was born in Belgium in 1960 and lives and works in Berlin. Lately, her works have been exhibited in solo exhibitions at the DAAD in Berlin, WIELS in Brussels, the Consortium in Dijon, Witte de With in Rotterdam, Mac’s in Hornu. Her works are on display in international private and public collections. Edith Dekyndt is now in residence at the Pinault Collection, near the Musée du Louvre Lens and on the invitation of the french curator Christine Macel, she will present  an installation at the international exhibition of the Venice Biennale 2017. 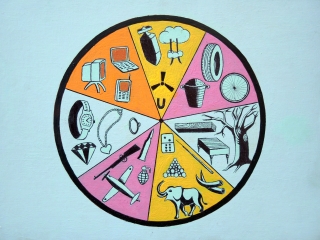 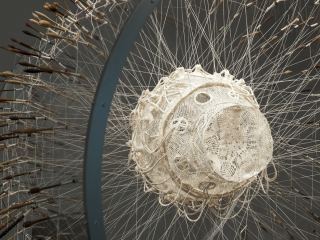 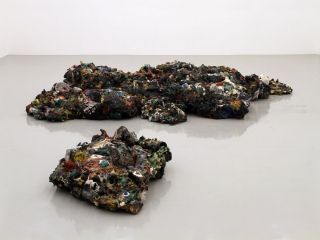 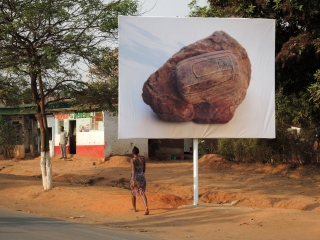 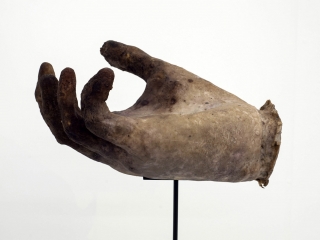 Maarten Vanden Eynde’s artistic practice consists of sculpture, photography and installation, and is often context related. From the perspective of changes brought about by globalisation, Vanden Eynde asks questions about evolution: what is progress? Are we moving forward? Where to? And why did we start moving in the first place? His work is situated exactly on the borderline between the past and the future; sometimes looking forward to the future of yesterday, sometimes looking back to the history of tomorrow.

For the BelgianArtPrize Vanden Eynde has drawn a triangle between the trade in cotton and uranium, Belgium’s mercantile history and every human’s capacity to rewrite history. He shows three works that are part of Triangular Trade, a long-running research project. Ils ont partagé le monde is a series of nine paintings he did together with the Congolese painter Musasa showing the most important raw materials that provide the foundations of the world that we know. The Gadget, a 3D version in bobbin lace of the very first atom bomb, hints to the significant link between cotton and uranium. The installation Around the World, a bobbin in the form of a rocket, symbolises the important role that cotton plays on a global scale.

For his installation in the BelgianArtPrize 2017, the artist received the generous support of :

Maarten Vanden Eynde (b. 1977, Leuven, BE) works in Brussels (BE) and Saint-Mihiel (FR). In recent years his works were included in the exhibitions ‘2050. A Brief History of the Future’ in Palazzo Reale, Milan (2016) and the Royal Museums of Fine Arts of Belgium, Brussels (2015), ‘Réalités Filantes, #4’ at the Lubumbashi Biennale (2015), ‘Beyond Earth Art’ at the Johnson Museum of Art in Ithaca (2014), ‘Ja Natuurlijk’, Gemeentemuseum Den Haag (2013), during ‘Manifesta9’ in Genk (2012), ‘The Museum of Forgotten History’ at M HKA, Antwerp (2012) and Dublin Contemporary (2011). In 2005 he founded the organisation  ‘Enough Room for Space’, a mobile platform for site-specific projects, together with Marjolijn Dijkman.

On May 24 a LUNÄ talk takes place in Bozar in the framework of the BelgianArtPrize about the influence of cotton production and trade on the creation of nation states and other global power structures. 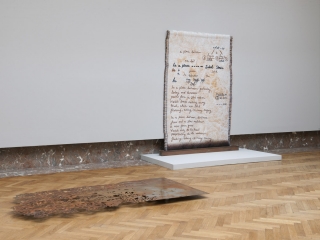 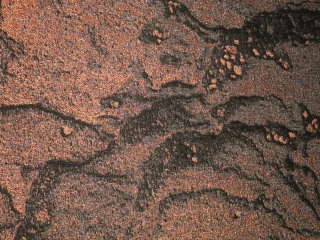 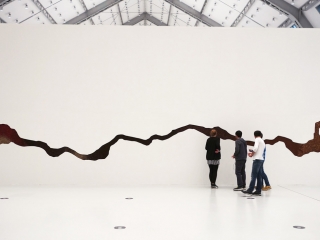 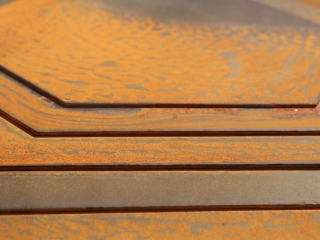 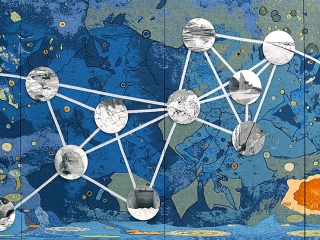 Otobong Nkanga’s multidisciplinary practice spans drawing, photography, installation, video and performance, and focuses on the interrelation between environment, architecture and history. Her work weaves together concerns about land, natural resources, architecture, the value connected to them and the dynamic status of remembrance. These predominantly political topics are incorporated into poetic combinations of autobiographic and collective narratives, memories and concepts.

For the BelgianArtPrize, Otobong Nkanga is interested in the notions of corrosion, oxidation, impregnation and contamination. With three textile pieces and a steel sculpture, she continues to explore the transformation processes of materials. She experiments with crystallization of a textile piece (Steel to Rust – Slow Growth), or with a rusted and laser-cut plate in steel, evoking the effects of corrosion (Steel to Rust – Resistance), or in another textile piece with the slow impregnation of a liquid contaminating thus the poem that has been woven in it (In a Place Yet Unknown). Her inspiration comes from the transformation processes present in our society, seemingly built on cast-iron values, but in which hide beneath the surface (in)visible mechanisms of corrosion, crystallisation of ideologies and the birth of new structures, all signs of life.

In 2017 she participates at Documenta 14 in Athens and Kassel.